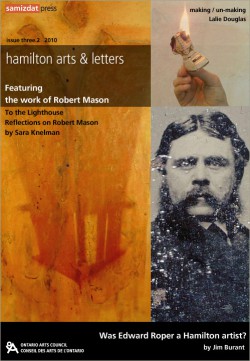 Hamilton Arts & Letters (HAL) is a magazine that reflects the ethos of a particular place, and reaches out to other places. Produced on the traditional lands of the Anishinaabe people and the Haudenosaunee people. Proudly Hamilton, but determinedly serving readers across Canada, and beyond.

With an attractive, accessible, and relevant digital presence, HAL offers the best in writing, fine art, film, and audio artistry to a discerning and growing subscriber base and broader readership. HAL builds infrastructure for artists and gives Hamilton artists and writers, emerging to established, opportunities to present new works alongside their peers from across Canada and around the world.

Social progress is the weight of laws designed to alleviate human suffering. In Canada, particularly Hamilton, the Labour movement has been in the forefront of groups seeking such legislation. Pensions, health insurance, the shorter workday, a living wage, – all these were fought for by workers.[1] Now Hamilton’s industrial employment base has shrunk by nearly one-half, while the leadership of a socially engaged Labour movement has been targeted and diminished. At the same time there are opportunities for reinvention, and it falls to the arts more and more to act as a mobilizing tool in the city’s rebirth. Read Earl Miller’s “Art is Labour: Carole Condé and Karl Beveridge” Issue 9.1. Gary Geddes also expresses this aspect of HAL’s mandate in his essay “Smoke Signals” Issue 6.1.

Similarly, the arts express most eloquently the resistance of the world’s citizenry to the exploitation of the planet’s resources and the impact this has on the environment. For this aspect of HAL’s mandate read Jaime Yard’s essay “David Day’s THE COWICHAN 40 Years On” in Issue seven.1 and Jeffery Donaldson’s “Paris Talks • Environmental Returns: Northrop Frye’s Axis Mundi Re-oriented” in Issue 8.2.

At HAL we believe that Indigenous writers and artists are creating some of the most exciting and important work in Canada. See, for example, “Portfolio: The Fifth World & Farewell Mendel” in Issue 8.1, and A Portfolio of Paintings by Kent Monkman in HA&L issue seven.2.

Why We Exist
HA&L provides a professional context for Artists and Writers across Canada, and produces a Free Open Access journal that is a platform for a range of creative voices from different disciplines. HAL is a meeting place for the exchange of ideas.

• Publish engaging writing on art and culture
• Provide a professional context for artists and writers in Hamilton, connect them with the larger community of artists across Canada, and profile the work of all contributors to an international audience
• Publish contemporary art by established, emerging, and under recognized artists
• Maintain a free archive with all back issues available online
• Provide a platform for a range of creative voices from different artistic disciplines, different generations, and different cultural backgrounds
• Recognize the history, creativity, and courage of sexually diverse communities
• Create a vital meeting place for debate and the exchange of ideas